Hello everyone! I am Sound Creator Ohtani. Well, the third is about mastering.

From the start, I think you’d question, “What’s mastering?” With all the recorded music not having the scatter of volume, quality, and others, mastering is a task of carrying out the adjustment so that it can be listened to as one CD and of continuing to create the fade-out, which does things like determining the number of seconds between tracks, and so on.

By going through the process called mastering, each piece will be “Crisp!”, and they will reach the point of being better audible as music. It might be near the image that appears to iron a shirt if I try to use a metaphor forcibly.

As a result, the whole balance will be in order and the consistency as a work will be good. The sound produced here will turn into the final product, and in order for it to become the sound that all of you will actually listen to, it is a very important process. 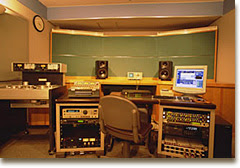 It’s this kind of feeling in the mastering studio.

The mastering engineers will carry out these tasks at the studio that professionally performs CD mastering. I will attend that place and go on confirming the sound of each piece.

In Order for You to Listen with Good Sound

If compared with the mastering of 93 pieces of Original Sound Track’s 3-disc set + 7 pieces of Vocal Traxx of Sonic the Hedgehog that I handled previously, it’s 52 pieces in total this time, so it’s haaalf! “Would it be easy?”, I wonder, but there was no such possibility at all…. Going back to the process preceding mastering, it takes human labor in the preparation of sound source for the soundtrack as well this time.

The capacity limitation is very strict for the BGM data inserted to the game, and even though I store the data in the decided quota, various adjustments, schemes, this and that are performed so that it is nicely audible as music. I want it to play the music that has intensity even with low capacity, so there becomes the place for sound creators to show their skills.

Conversely, in order to have no limitation in that sense at all in the CD of this time, I replace the waveforms used in all the music with something that has high sound quality as the sound source for the soundtrack, and re-record all the pieces anew adjusting the mix balance while listening with not DS’s speakers but monitor speakers. So I think the sound quality is completely different. You can listen to the things similar to the ones in the game in Sound Test as well, can’t you? I bring such produced sound source to the mastering studio and continue to proceed with the tasks like what I have written in the beginning.

Well, next is the teary (?) final part of Soundtrack Production Diary at last.