The Section of Sound Listening Trial Is Open!

Hello everyone! I am Sound Creator Ohtani.

The section of sound listening trial has been open since this week, hasn’t it? To the people who have not yet experienced the music of Sonic Rush Adventure, please try to listen to it by all means!

For this reason, the second is about artwork. Frankly, it is also the happiest process when producing soundtrack. This game has the soundtrack that included the compositions produced with built-in sound source as well, and personally, I have an ambition that says, “For the package, I wanna have paper sleeve with handmade feeling!!”….

However, although I said “paper sleeve,” there are many kinds, so as a result of seeing various CDs for reference, and considering as well as examining the number of characters and the like this time, I decided to go with the style called 6-panel Digipak. I also determined the coating, which fabricates the surface texture in mat feeling, and so on at this point of time. We will read the tracklist, lyrics, and others holding it, so the feel is important as well, isn’t it?

Regarding the design, I decided to finish it up in the taste that matches the paperlike texture as well and that is somewhat different from the game package while using the materials like title logo, background, and gulls from the original materials of characters such as Sonic, Marine, and Blaze. 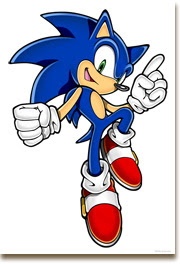 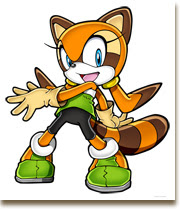 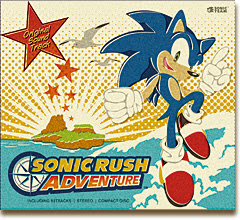 This is the version still in progress. There are up to two parts different from the final version.

The designer made surface 1 (cover of package) first and proceeded with the design of inner surfaces, tray surface, and others after deciding the whole direction. We went on working out the design while repeating the detailed communication many times over. 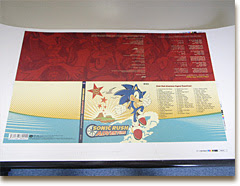 When I confirmed that there was no problem after carefully repeating the checking that there was no mistake or oversight in the texts like tracklist, lyrics, and staff credit, the manuscript data for submission was prepared. When trying to actually print the produced design data, something that became the color correction was delivered from the printing company in order to confirm what kind of color it turned into. 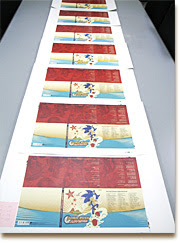 It is difficult to see with this photo, but the colors are different for all of them.

This time, there was influence of paper quality, surface’s coat, and others as well. It did not easily harmonize with the color tone that I seemed to desire and the color correction was redone many times over.

From design to printing, I am very satisfied that it is worth of being particular and that it was completed in a quite good feeling. I think the part that is the pleasantly cheerful feeling for the exterior and in which the interior suddenly becomes a different atmosphere turns into a good accent.

These days are the times of ending up being able to buy music with digital download on iTunes Store and the like, as you know, and if it has become so, I have reached the point of increasingly considering the meaning that it holds for the package. If simply enjoying the music, I take it that digital download is fine also, but still, so long as one holds it as an object, I want to continue to be as particular as possible in the style, design, and others of CD even from now on by the fact that holding it, I wanna have joyful design.

Next is about mastering.