I Am Sound Creator Ohtani 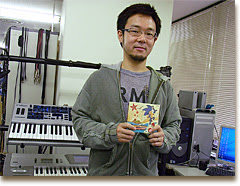 Hello everyone! I am Ohtani who took charge of the music of Sonic Rush Adventure.

I was requested by Director Osumi to write the soundtrack’s production diary and it turned out that I will post it for four times in total! Please read it until the end.

Compositions That Have Become a Completion Rich in Variety

For this work, I joined the production since after the development of Sonic the Hedgehog (PS3, Xbox 360) ended. It is to the extent that “Adventure” is attached to the title, so I think the compositions also become a completion rich in variety from melodious tunes to full-scale orchestra while inheriting groovy sampling music in order to express the expanse of the ocean adventure. We three—Tomoya Ohtani, Mariko Nanba, and Seirou Okamoto—produced them.

I think the people who have already played the game know that I have also tried to variously stuff the renditions rich in transitions you can expect only in game music. For example, the tunes of thingamajig are changing gradually and gorgeously when new thingamajig takes form and the range of motion expands, the music changes when entering the inside of thingamajig, and the part of music increases when approaching thingamajig. 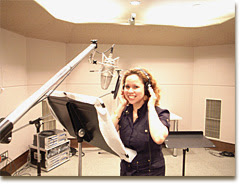 She is the vocalist Ms. Tahirih in a scene during recording.

I wonder if the theme song A New Venture playing in the title demo becomes the first vocal song in Sonic series of handheld game consoles.

Having the order of wanting a fresh feeling, I recorded it with female vocal.

Now, about the subject of the Soundtrack Production Diary of this column. When the end of game development has been in sight as well, the preparation of soundtrack starts little by little. This time, it has been decided in the beginning that it will be released with the game simultaneously and that it is an exclusive release of SEGA Direct. 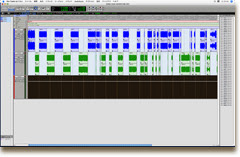 This is the waveform editing screen….

The task started foremost is calculating how long the recording time the compositions, jingles, and others produced for the game would be in total and deciding the specifications like the number of discs. This time, including all the produced music completely, it was a volume tightly settled in one CD.

Even if this kind of image ↑ is shown, I do not think I am happy at all, but it is the figure of the time when I am lining up the waveforms of the recorded music and determining the track order…. Like this, I go on examining the track order while rearranging the music files.

At the same time of preparation of the sound source, I organize all the character elements like track titles, lyrics, and staff credit, which will be printed in the booklet, and go into the preparation of artwork production.

Therefore, the next is about artwork. Stay tuned!