About the Elements of Online Play

About the Elements of Online Play

Hello everyone! I am Director Sakae Osumi. It has been released in Japan on October 18 (Thursday) as well, but I wonder if all of you are able to play it. （＾－＾ Well, I want to slightly introduce about the elements of online play this time. 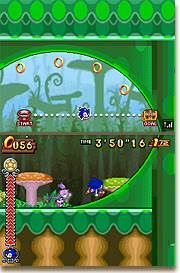 By being newly compatible with Wi-Fi this time, it became possible to compete against the fellow players around the world in the mini games exclusive for battles, such as race battle of rivaling from start to goal and ring collecting of contending who can collect more rings within time limit, with various stages as the settings!!

In order to perform in a more advantageous position than the battle rival, the players who are more familiar with the structures of the stages will be beneficial, so it is the chance to show your skill and memory trained in the habitual playings! 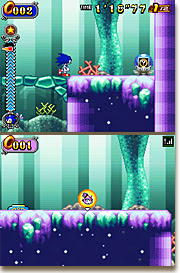 And your best time recorded in the time attack of each stage also became possible to be put on the world ranking with Wi-Fi!!

I think you can actually feel that the goal time will steadily be reduced by continuing to discover the shortest route of each stage, so aim for the world’s fastest hedgehog! Please try to challenge it by all means!! 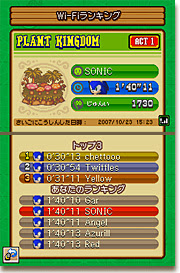 I hope all of you by all means can pick up and play Sonic Rush Adventure, which is variously full load of playing elements. （＾－＾ノ

Sound Creator Ohtani will appear in the next column! I think that interesting stories like secret story of soundtrack production will be diversely unfolded, so please look forward to it!