In the Creators Interview, which had started since August 1, 2006, among the comments received from until the middle of August, most comments were the contents that said, “Because the story of Sonic Adventure 2 and Sonic Adventure 2: Battle is very touching, I want to hear the talk of the person, who was in charge of the story by all means.”

Thank you in advance! 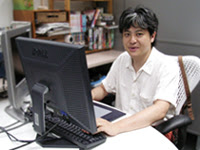 It is I who should thank you. Okay.

How did you think of the results of questionnaire this time after seeing them?

Honestly, I am very happy! Because making someone touched with a game that I made was also my life goal, it would be all right if I died sometime with this, don’t you agree? (Laughs)

Since when were you joined in Sonic Team? From which title were you in charge of its story? And could you tell us the titles (not limited to Sonic) that you were in charge of their stories so far?

If other than Sonic, it is to the extent that I wrote just a bit of event scenario inside the Panzer Dragoon Saga of Saturn era. As I did things like making up the conversation events of the main character and the heroin, and showing the loving atmosphere as I pleased, I disgusted the people around me because it was a conservative game. (Sarcastic laughs)

For the story creation, I wonder what kind of procedures you underwent. What is your source of ideas? And I wonder if there are things and the like that you have decided on reference.

Uh, this is a strange thing. When I read back the story that I had written afterwards, even I puzzle over how I wrote this kind of story.

If I remember correctly, during Sonic Adventure 2, it was the form that I mostly decided the story and setting first and continued to apply the game and stages there. Conversely, in Sonic Heroes, it was the feeling that the game was based on the action stages in the beginning and I went on covering those gaps with a story.

As for my source of ideas, I think there is a really big influence of manga, anime, and others that I am reading since I was little.

In my favorite scenes of Sonic Adventure 2 and Sonic Adventure 2: Battle, there is a scene in which Shadow and Maria view the earth from the Space Colony, but in this scene, the influence of one of my top three manga Please Save My Earth appears hugely. Actually, it turned out that the voice actress (Yuri Shiratori) of the heroin role of Please Save My Earth was also in charge of Maria’s voice and I felt that it seems like a destiny. 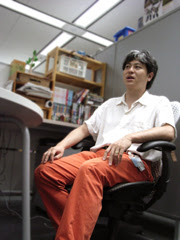 I remember that for some reason, I was the only one who joyfully shouted, “Sonic will go to the space this time! ’Cause it’s become the 21st century already!”, and also its reasons, then the people around me became openmouthed.

In the end, it means that I dragged everyone into it and we ended up creating the Space Colony stage in the mood like “Well, since it can’t be helped, are we going to space together?”, though….

I was very happy and it was fun when we were somehow carried away by such passion and ended up doing it without any foundation at all, but everyone in the team gave me support to it and the good settings (action stages, event stages, and others) beyond imagination were produced.

As for the sorrow … after all, there were scenes that I had to cut tearfully because of the schedule circumstances and those did not make it with regrets. I was so sad that I thought that if at that time, God appeared and said, “In exchange for creating those scenes, hand over an arm of yours,” I would have my arm cut off without hesitation. It was the moment when I was feeling strongly that the heartbroken thought is exactly this sorrow, right?

We had seen your storyboard and were surprised that you made them all by yourself even for the parts of illustration. I wonder if there are many cases where the people who are in charge of the planning even make storyboard like this. And your drawing is also quite a skill, but regarding the illustrations, did you study them somewhere?

No, no, I am extremely embarrassed.

I wanted to become an animator from the start, but I gave up that path for the reason of not having drawing skill. But I knew that the so-called production (storyboard), story creation, and others were not related to drawing skill, and I became in charge of the story of Sonic Adventure 2 by chance. As long as I could do it, whatever I did myself, I learned scripting, how to draw pictures, and others by self-study.

Other than the work of story creation, what kind of tasks are you doing?

There are many tasks of the so-called character supervision. The things like going to the voice recording of Sonic costume shows and talking with voice actors are very fun tasks. (Laughs)

Could you also please tell us the triggers, motives, and the like of joining SEGA?

When I joined the company, the battle of the 32-bit next-generation game consoles had just begun, but I wanted to try to fight by SEGA’s slogan origin in that battle and hurried to join SEGA. I liked SEGA games very much.

After all, the need to do things that have strong storylines was what I had been thinking from the beginning.

I am doing things like making the robot toys transform and combine. My recent favorites are Chogokin Aquarion and Bukiborg.

Recently, I am in charge of Sonic’s action stage designs and events on Wii. For the rest, I am doing story composition and the like of PlayStation 3 and Xbox 360 game Sonic the Hedgehog. 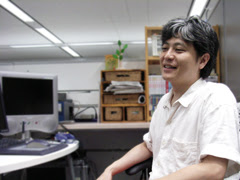 As I thought, it is Sonic Adventure 2.

It is Shadow the Hedgehog. In reality, I am also his creator, but there are times when I feel the stronger bond than my true relatives. I cannot think of others anymore. I am unable to use Chaos Control, though. (Laughs)

Shadow the Hedgehog was born with your effort, right? If you like, could you also let us ask about the secret story of Shadow’s birth and so forth?

No, it was a very difficult delivery because it was a proposal that created a character who is similar to Sonic or is cool beyond that. (Laughs) The order called the black hedgehog had been decided, but it took a considerable amount of time until this guy started to talk inside my mind.

One late night, when I was thinking about the lines of the confrontation scene of Sonic vs Shadow inside my car returning home from work, after Sonic said, “I found you, faker!”, when Shadow responded for the first time, “Faker? I think you’re the fake hedgehog around here,” I felt, It has come!, for the first time. From the tone of the voice that had come to echo in my mind at that time, I feel that Shadow’s personal pronoun had been decided to be “boku” [“I” for masculine use] naturally.

This personal pronoun “boku” of Shadow is very popular to women, but I remember that there were many disagreeing opinions inside my team in the beginning. However, because I myself treated Shadow as an image that is a very subtle and pure character, this “boku” was a part that I could not throw away.

Actually, I did not like the Sonic in Genesis era. Honestly, it did not fit his character.

So, when I was put in Sonic Adventure, I was enthusiastic, “I’ll create the Sonic that I like!”, and also did various nonsense (things like dropping a tub onto my head), but in the end, I feel that I was just dancing on Sonic’s palm. That guy’s chest is huge. I cannot win easily, can I?

From now on, for the young people who are thinking, I want to try to work in a game industry!, if you have any advice, could you tell us about it?

In reality, when they enter the game industry, they would not have the time to study, so I want them to study various things in advance right away. Later, whenever they carry only these knowledge and abilities that would not lose to anyone, I think those would support themselves in difficult situations certainly. Those are whatever, though. 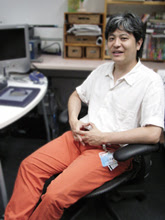 Thank you for always supporting Sonic and Sonic Channel.

As I think Sonic would not stop running even from now on, all of you also please catch up with him by all means.