For the 10th Creators Interview, we will introduce Shun Nakamura who was in charge of Director in Sonic the Hedgehog!

This time, we would like to ask some questions to Mr. Shun Nakamura, the Director of Sonic the Hedgehog, which was released on December 21.

Nice to meet you! 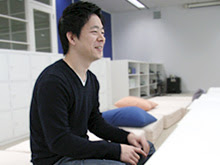 Nice to meet you.

In what kind of circumstances you became the Director of Sonic the Hedgehog team?

After Billy Hatcher and the Giant Egg ended, I had been thinking of a variety of new plans. At that time, I heard directly from my Section Chief Nakamoto, “I think this time we’ll create Sonic in Japan, too.” “Well then, would you try to think of Sonic’s project?” With that said, it turned out that I was going to be the Director from the flow where I had made the new plans.

The game title of this time is Sonic the Hedgehog. There is also the fact that it is the 15th anniversary of Sonic’s birth and it is said that it returned to its root, but I think that the determination to decide the title to be the same as the first game’s is something that the great courage is necessary. What is the reason for deciding this title in the end? 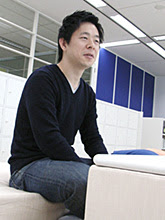 At the proposal stage, it was Sonic the Hedgehog from the relatively first direction. There was also the fact about the next-generation game consoles and the impact that was nearly the same as the changing from 2D to 3D was being requested.

I think that if it were a title with far too many sequels, there would be a sense of security to the users, but because the feeling of expectation would become weak, the next-generation game consoles would not grow, either. So with a title in which the users could have the feeling of expectation of the new reborn Sonic, a title in which the development staff could create a better game while feeling the weight of the title, I decided to use the first-generation title Sonic the Hedgehog.

After all, there were also many objections. They variously talked about the importance of the first-generation title and said that it would be better to add a subtitle. Of course, there was pressure, too, because the Sonic from 15 years ago is great, isn’t it?

How did you create the new character Silver?

Actually, before working on Sonic the Hedgehog, I was thinking about another game that used psychokinesis. After that, when I had been arranged to create Sonic the Hedgehog, the addition of a new character and the use of a physics engine had been decided from the beginning, so I think I could skillfully utilize the idea that used the psychokinesis, the production, and others to the new character in this game. And this fitted wonderfully.

As it is a character of a game feature, which is entirely different from Sonic, there were some serious difficulties of just that, though. And I also paid attention to make sure that Silver’s image did not overlap with Shadow and other characters. As a result, I think I had been able to create a very wonderful character.

“Silver” starts with the first letter “S” in succession to “Sonic” and “Shadow,” right? Is there any reason to this? 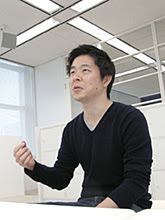 I heard that in America, when the games are put in the department, there are many cases that they are arranged in alphabetical order. For example, like during Shadow the Hedgehog, in the case where it has been arranged that the game is released with a character name, if it is the game that starts with “S,” they could put it beside Sonic games. Because of that example, I think that the consumers could recognize the relationship with Sonic and the possibility led to purchases might extend.

There is such situation as well and finally, I settled in the name that starts from “S.” I think that the name called Silver is just perfect even with the color, which is the character’s feature, and the meaning that makes his ability an image.

Upon advancing the project, what was your greatest trouble? In what kind of place you went through your difficulty?

Because the project also had a fairly big size of scope and the people came join in one after another, first of all, remembering those people’s faces and names was tough. (Laughs) And with the said next-generation consoles, as we did things like examining the new technology and there were also many tasks for the parts where the amount of data greatly increases, the production takes a very long period of time, too.

In the beginning, we did things like moving the boxes with the physics engine and being pleased at the rendering of the new visual, but I was easy-going. Various tasks also appeared even from there on and I think that from the easygoingness of the appraisals, I ended up causing troubles for my project members in one way or another.

During the progress of the project, what kind of matter was your happiness? 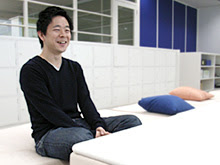 There is plenty, but after all, in reality, it is the time I saw the customers’ reaction when they touched Sonic. It is especially the time when we announced this game for the first time in America’s event called E3, I saw the foreigners played the only same stage for many times while saying, “Cool!”, and in Tokyo Game Show, a lot of customers formed a line and played the demo version that we had been making desperately until that day’s morning.

When I saw such scenes, I am very happy after all, so I think I am glad to have done it.

And recently, as I could take a holiday at last, I went abroad. A lot of Sonic’s are also being displayed there and when I saw the people buying those, too, I felt very touched.

Through this game, is there anything that you want to tell all of the players?

Hmm … after all, speaking of Sonic, it is speed, so I want them to enjoy that part. This time, there is a new mode called the ultra-high speed mode, too. For Sonic, it is an ordinary world, but for us, we could experience the shake-like speed and it is one of the few chances. (Laughs)

We would also like to ask about your personal matters. Could you please tell us the triggers, motives, and the like of joining SEGA?

From the start, I did not have the consciousness about game company and in my first job hunting, I got an unofficial offer in an entirely different industry, but I ended up reaching the point where I thought I could not discover the pleasure in that job itself no matter what and in the end, I turned down that unofficial offer and became a jobless university graduate.

In the beginning, as I did not have the intention about development, either, I marked a circle to the “Operation” field. At that point, there was a field called “Planning” next to it. “What’s this? Doesn’t this look interesting?” With that said, I x-ed out the “Operation” part, where I had placed a circle before, from above. (Laughs) I circled it again to “Planning” and tried to have an interview.

Then, it proceeded very quickly and I passed it somehow. It turned out that I would join SEGA and try to work there because it looks interesting. 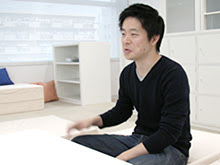 At that time, speaking of gaming, there was a strong impression that hardcore people are doing it. RPG, fighting games, among others. Moreover, I wanted to continue making things that ordinary people could play easily with a light mood.

In overseas, although the people could recognize gaming as something cultural just like anime, I feel that in Japan, its status is still low. Furthermore, I think that it would be nice if I continued to raise the status as something with cultural gaming and I want to go on making the said games even from now on.

During my university days, I do not have so many things that I could show off, but I belonged to the club that has a taste for sake and tennis. (Laughs) I really want to try playing and drinking every day….

The structure of the club itself is just something big that exceeds 100 people and because I had become a representative there, I wonder if I could utilize those experiences in any way in my current job.

Hmm … because last year, I was mostly working, my current hobby is becoming children’s partner. And watching children’s programs. Previously, I did not have many interests, either, but when I try to watch them again, they have a lot of interesting things and are educational.

Don’t children feel things with their intuition? Adults have a part where they receive explanation and end up getting something done. Even a game interestingly shows us with its decoration and because of that, actually, there would be times when its central part ends up becoming invisible. Currently, there are parts where the games become too complicated.

The children’s programs are straight balls and intuition. Even the works that we have done a little are being made so that the children would be glad. After watching them, I am quite inspired.

Now, Sonic’s development has just ended and when I think I am on break, for some reason, an invitation has arrived. For the moment, I cannot announce it, but it has a relationship with a blue guy and this time, it would also be a job that looks quite interesting. 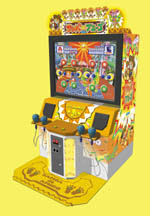 Hmm … I have memories in which they are both sometimes fun and sometimes tough, but Samba de Amigo leaves me the best impression.

“If it doesn’t proceed to a certain amount of money in the location test, the project would break up,” I was told by my boss of that time and I did the location test while my heart was pounding. I could feel the experience that you can expect only at the arcade, where the consumers could not easily taste.

It is a difficult question, isn’t it…? Sonic is my objective? Maybe. 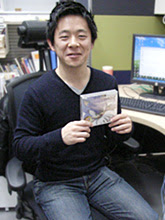 Thank you for always supporting Sonic.

Sonic has celebrated his 15th anniversary, but I think he would still continue to evolve with his 20th and 30th anniversaries after this. Please treat Sonic kindly even from now on.