For the second Creators Interview, we will introduce Kenjiro Morimoto who was in charge as Director and Main Game Designer in Sonic Riders! 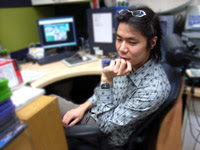 “A job in which I will create things and make people touched.” It did not mean that I could do anything, but I looked for the mentioned job with simple longing towards the so-called occupational classification known as development and it is because one of those was making games.

And so when it comes to why SEGA, this is again by the simple reason that I had spent the era when Fantasy Zone, Space Harrier, OutRun, and others had just enlivened the arcades, so it means that I, of course, owned Mark III, Genesis, and others as well, and the image that resembled the games (SEGA) was established during my middle and high school days. I had also found other famous companies in the game industry, but the number one reason I dared to choose SEGA is something known as the longing for SEGA.

Honestly, I had no knowledge at all regarding game production, so I did not have any clear plans like “What I wanna do?” Rather, “What can I do?”, I wanted to know that the most. But I wanted to express myself somehow in making things and I thought that there is no restriction in the way of self-expression using the media called games. No matter it is the system aspect or the scenario aspect, if it is possible to realize, it means that I would capture it very optimistically, but when I consider it now, I think that SEGA often hired the people who have this kind of positive thinking.

Nooo, I am embarrassed that I had not done anything I can boast to other people. (Laughs) During my high school days, I was active in a band (taking charge of guitar) with partners by means of my whole heart wanting to be popular among the girls. I did not have money but plenty of free time, so I practiced immensely, became fairly skillful, and finally discovered the future vision that has no foundation like “I will become a musician!”

Fortunately, I was not studying for exams nor doing anything, so I entered a preparatory school normally. “Too slow!” I will be scolded by Mr. Jet! (Laughs) 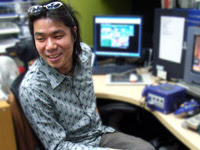 For this, again, I have nothing to the extent I can call as hobby, but suffice it to say that it is sake, is it? I do not really like such things as a wine expert which I can boast but the immersion in an environment where I can taste the sake with my five senses. Along the way of Kiyomizu-dera in Kyoto, there is a teahouse where I can command a full view of Kyoto city from a tatami room (upland), and I feel the luxury beyond description for the hot sake that I drink in winter there.

I like manga for the rest. When I am reading manga while drinking sake, I will forget the time. My recent exciting manga is Gantz. It is the best! I am moved to tears with my knees shaking!

Could you tell us the process until Sonic Riders was born? If you also have the hardship story and the like of that time, could you let us hear about them?

“What about the form of the racing game you can expect only in Sonic?” Such question became the motive of making Sonic Riders. When I dropped Sonic, who has high physical ability from the start, to racing genre, “What’d I place him on?”, it took a long time until I settled it.

It was difficult to imagine him driving an existing vehicle like car … I utilized his physical ability somehow and the exhilarating feeling you can expect only in Sonic resulted!

In continuing to variously imagine such racing development, I was interested in the field called extreme sports and at that time, Chief Officer Yuji Naka told me about the phenomenon known as turbulence of the cart world during chatting, and by observing those, I was able to go on bringing various ideas together into one form. All the elements—speed sensation, dynamism, and stylish feeling—matched Sonic’s image, and the running method of surfing on the wind using Extreme Gear (airboard) was done.

I think that the diverse course settings are also one of the appeals in Sonic Riders, but wasn’t there plenty of hardship since the stage of presenting the ideas in preparing that many? I wonder where the source of ideas came from.

I wonder how it was. I do not remember it clearly anymore, but various courses had appeared in the idea level. While the staff members presented the opinions as well, I carried out the selection with such themes as future impression, combination of nature and civilization, and journey from real world to parallel universe, and tried to line them up in accordance with color variation. In that sense, the courses of Heroes’ part were complete, but what I had difficulty in actually is Babylon’s part.

The color variation is also necessary in Babylon’s part after all, and what’s more, I cannot use a very extraordinary worldview from the location as the parallel world that runs the same time base…. In the end, I progressed variously leaving them undecided in its entirety.

I’ll say I have that, too … or rather, there is also a time when I was conversely glad to be able to pick out the unimagined, original worlds like frozen base due to radiative cooling, jungle colored in snowscape due to spores, and desert of solar eclipse, in the initial presentation of ideas.

It feels as if Jet the Hawk is similar to you, though?

To ask such question, you are having a very good time in this game, aren’t you? (Laughs) In the same way as the imagination, the model of this character Jet is me myself. Jet is a being who makes Sonic’s pride awakened. Towards the character Sonic, the owner of the personality which is freewheeling and unrestricted by anyone, what should I do to make Sonic himself carry the meaning of participation in this race? That is the motive of considering the character Jet.

Similar to Sonic, he has the pride with regard to speed and he is bad but innocent somewhere. I performed the characterization aiming at such role in which the players would have empathy for Sonic as well as Jet.

For the design, the birds become the motive as beings who overcome in gravity, which is also the theme of this game.

The childish emotion, hateful expression, and others that Jet shows lets us variously recall and reflect on our childhood when we hated to lose.

In short, I am a field supervisor of production. I have reached where I am by working my way up at the field the whole time, so even after I have become a director, I am also in charge of scenario, game design, and others basically, and what’s more, I hope that I can continue to do my best as a field worker even from now on. Well, having said that, those young guys have grown rapidly and I wonder if it would become a situation of producing things with various purposes and slightly extensive view in going on to build up the future SEGA or Sonic brand. 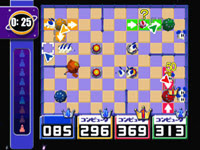 A lot have come along and honestly, there are more tasks that I do not want to recall (laughs), but the one I enjoyed the most is the puzzle stage production of ChuChu Rocket!. It could let me straightly reflect on the parts where the rules are clear and on the design ideas in a short time, so I had had a good time in many ways.

It is Amy. She’s self-centered and the part where she drags the nearby guys around at her convenience…. This pushy personality and the words spoken by her queenlike nature have some kind of hypnotic effect swaying the brains of the listeners, and the enchanting feeling which also resembled the trance state….

I’m sorry. (Laughs) The part where she follows the traces of Sonic, who runs about trying to escape, by force halfway, and the like are lovable and cute, aren’t they?

I wonder what it is…. It is hard to describe it well, but suffice it to say that he is my boss, is he? He has his own way and is difficult to deal with but reliable to guide me in the end. “Having finished producing Sonic Riders, I was somewhat reviewed by Sonic.” It is that kind of feeling. 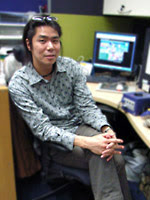 Thank you for always visiting Sonic Channel. I also want to create one called Jet Channel soon. (Laughs) Well, it is as a joke and even though I will take good care of the worldview which Sonic is holding even from now on, I want to continue making games as if I could settle a new Sonic style in it, so please look forward to it.