For the first commemorable Creators Interview, we will introduce Yuji Uekawa who is well-known for his character designs and illustrations of Sonic series and so forth.

Well then, the first Creators Interview, Mr. Yuji Uekawa. Nice to meet you.

Hello. Nice to meet you. 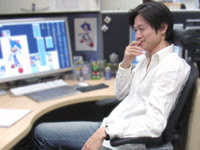 Yes. Well, if I say this, it would not be an answer of a very good example, but I was a person who almost never did gaming since student days…. The reason I had interest in this industry is the implication called the little big entertainment.

The big entertainment…. Could you tell us a little more specifically?

Specifically speaking, I want to make things that adults and children who saw them could feel the fun! For example, they just look at the illustrations, plushies, toys, and others that used the characters for children and it would make me happy.

“I want to go on drawing the pictures of such characters especially, world view, and so on!” That was my dream since I was a child.

To realize your dream, it means that the chosen stage was SEGA, isn’t it? From your point of view, I wonder what kind of impression SEGA was making as a company.

The fact that I chose SEGA is that there was a strong image that they are just about to create new things anyhow, no matter it is in technology, service, or content.

The time it became my decisive blow is during SEGA’s information session that I participated in my job hunting, where in response to the question, “Would you like to create a mascot character in SEGA?”, there was a reply, “Now, we are producing an action game that used that character and would continue to expand it regularly from now on.”

Because of that, I reacted, “Oh?!” (Laughs) That was the time when consoles for use in family started spreading and video games began to generalize in great influence. So, I thought that the needs of the character would go on extending largely from this media certainly.

And it means that you had an encounter with Sonic, right?

After all, Sonic’s style of popularity was an aspiration, wasn’t it?

Particularly now, Japan’s manga, anime, and others are supported even in overseas and that recognition is spreading, but at that time, it was still difficult to think that the original things made in Japan are supported to that degree in overseas. Moreover, I was forced to be surprised by the fact that overseas markets were being made conscious in the planning phase. That sudden popularity was not a hindsight-based opinion.

Of course, within Japan we catch sight of them with the facilities available everywhere nationwide, and related goods and the like are also being released.

As the fact that I wanted to do myself absorbedly even in the parts of expansion from the game had all been realized, I felt enviously regretted even to my pride, (laughs) because at that time, I really was not concerned with that Sonic like now.

Um, after all, it is supposed to be the Sonic characters’ renewal work, isn’t it?

During the development of Sonic Adventure in 1998, I was in charge of the characters’ renewal, but in that moment of actual situation, I was not feeling the pressure very much, either, and did the job freely. But the problems came after that…

The importance of obtaining the already completed and acknowledged designs and that responsibility became big inside myself day by day. Even now the pressure continues, but I think that to me, that as the responsibility of the creation part becomes very, very worth doing.

Hmm … honestly, the impression when I saw the character called Sonic for the first time was “What…. A lion? A cat?” ’Cause I didn’t understand the words like “hedgehog” [in English]. After hearing the word “hedgehog” in Japanese, I said, “Errr, it’s strange to retain the prototype!” (Laughs)

However, the blue hedgehog means movements and attacks that made great sense, and lightly running and rolling past inside the game screen. “Oh, this is the game character!”, I was corrected and understood the importance of the concept regarding the character design in the game.

I will design the character based on the gameplay. They were entirely different things from how to create it to the extent that it was good just to be cool and cute to the eyes.

Even while doing trial and error, the changes that I had made finally is making his body proportions a little bigger, applying colors to his pupils, slightly opening his mouth which was closed before, showing his white teeth, and emphasizing his naughtiness. This was because I wanted to show Sonic’s actions very bravely and emphasize the American taste more now than before.

Even in the parts other than the game, I wanted to easily present the characteristics known as Sonic in those poses and visuals only.

Actually, there were people who might also know about the decision of this Sonic’s renewal and that at the same time, I was creating the cover artwork for use in the original soundtrack CD of the title Sonic R. At that time, with the said concept, the Sonic that has a strong cartoon-like illustration taste inside me that I could draw naturally was the arranged design that held the direction of the renewal. I said, “Yes, speaking of Sonic, isn’t it this kind of feeling?” 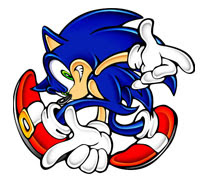 Immediately following that, the drawing was the Sonic, which had become the main visual with brave pose that basically showed his arm from inseam in a rotating circle, and inside of me, I think even now that eight years had passed, the cut could present the newest Sonic identity.

Fortunately, the impressions were also good after release and I was a little relieved because as one would expect, I had anxiety. But I think it was the evaluation linked with the evolution of the game itself and was unavoidable.

Of course, even now I also hear the voices saying that they like the original better. I myself do not think of things like surpassing it. I just think I could contribute to the tasks that expand one of directions, possibilities, and others that Sonic holds.

In that sense, I think Sonic would still continue to evolve depending on various designers even from now on. Well, I was supposed to be young, right? Now, I am scared and may not be able to touch it. (Laughs)

Previously, in the development of normal games, from the era of pixel art until early era of Dreamcast (ADV1 for Sonic), I was mainly in charge of designs, illustrations, modeling, motions, and the like of character’s surroundings.

Thereafter, I leave from direct game development a little and am doing things like management and primarily in the core, Sonic-related character designs, illustration production, license supervision, and so on in my main duties. By the way, it does not mean that I would be designing all characters. Here, the fact that its creator is different depending on the character would also probably be the point of being able to create unique characters, wouldn’t it?

Later, as I am also concerned with the production and operation of this Sonic Channel that everyone is visiting, I am regularly looking at the things like postings, opinions, and so forth from all of you, too.

During my childhood, I had also passed by the painting classroom and then the whole time I did things like drawing and creating pictures, and looking at other various works, and eventually, it is the feeling that I end up carrying out the hobby as it is in my job, isn’t it?

Hmm … if it is literally a being that I would not catch up with, I wonder. In this industry, the people who are in charge of Sonic are the seniors. (Laughs)

Actual character is different from general products, merchandise, and the like, and I think it is something that would go on growing and transforming steadily because of the era, how it is being supported, the way of utilizing it, and others.

As I think in this year 2006, the ability to celebrate his 15th anniversary and also everyone’s support of course have power, growth, and others of such character itself, here is where I want to continue pursuing even from now on so that I would not be left behind by the growth. 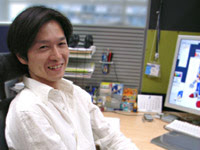 Yes. I really thank to all of you who are always visiting this Sonic Channel.

Because we also want to provide more and more information related to Sonic, the contents that we could enjoy together, and others, all of you also please participate regularly, all right?

(Personally, I am looking forward to your fan art, which is currently being accepted at any time!)

And together with all of you, let’s continue to make Sonic grow bigger and bigger even from now on!