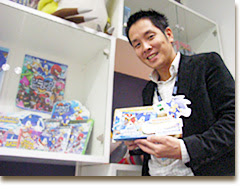 Hello everyone. （＾ー＾） I am Director Sakae Osumi. From this time, I hope I can use this space of Staff Column and introduce the appeals of Sonic Rush Adventure. I also plan to publish something that becomes the Soundtrack Production Diary by the sound director after me, so please look forward to this, too!

Well then, thank you in advance!

Released on October 18 (Thursday) at Last! ~ The Highlights This Time ~ 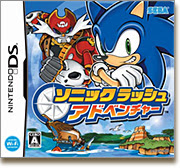 Well, Sonic Rush Adventure has already been released in Europe on September 14 (Friday) and in America on September 18 (Tuesday) in which the world ranking is livening up in the pink of condition as well, but it also turned out to be released in Japan on October 18 (Thursday) at last!! Clap, clap, clap. ＼（＾O＾）／ Therefore, I will introduce the highlights this time immediately, but first of all, lo and behold, Sonic challenges an ocean adventure, the first in the series!! 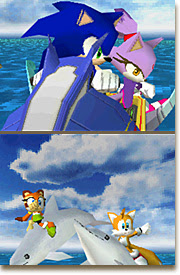 The making of South Sea Island called Southern Island as the new setting, the encounter with the raccoon girl Marine, various vehicles made based on the unusual substances known as materials, the treasures discovered on various islands, the pirates who get in the way, Captain Whisker who secretly maneuvers looking for hidden treasure, the sea area where seabed caverns, ghost ships, and others make frequent appearances, and last but not least, the reunion with Blaze, etc! The heart-palpitating and exciting big adventure is awaiting!!

Next time, I will go introduce the real playing parts that depend on such various situations of the big adventure as they mix the elements, which have greatly been made more powerful than previous game. Please look forward to it! （＾＾）